Now that NaNoWriMo is over, I’ve switched back to revision mode for Holder of Ash. I’ve started my third (of probably many) revisions, and like the first two, it’s a big one.

At the start of November, I got really excited and did some prewriting for the sequel, The Assembler Constant.  I set out on that little journey fully expecting to realize issues in Holder of Ash—things I would have to foreshadow better, conflicts that have to be seeded if they’re going to show up in the sequels with any convincing delivery.

I realized all at once that Kenjn, the dominant councilor for Queen Djet Zne’tal, needed to be male instead of female.  It was the kind of realization that was at once both hard and easy to internalize—I knew it was going to be the right thing to do, and yet I loved the character as she was.  I can’t say that it was a “darling” exactly, but I was at least fond of her.  She was like a matronly version of Zarya from the game Overwatch (which is a home run of a character shorthand that I fully intend to use, so back away from that with your hands where I can see them).

The change became important to me for a couple of reasons: I had used a lot of female characters to the point of having a large proportion of the males be bad guys, and I loved the subtle effect that making Kenjn male did to the relationship between Djet and one of the other main characters.  It felt right.

So Kenjn would become male, but now I had a council of three males, an antagonistic female, and the queen herself.  I didn’t like the way it was shaping up so far as it concerned the sequel.  In Holder of Ash it would probably be fine, but…

That led me to realize that I needed to cut the pool of councilors in half.  Four to two.  Kenjn would stay and the antagonistic female would stay, because those were the only two that actually impacted the plot in a really meaningful way.

I got to dwell on this change through all of November while I wrote other things for NaNoWriMo.  It really let the scope of the change sink in.  It’s not that the scope was staggeringly big or that the change would be hard, but just letting it sink in helped me become confident with what I was planning to do to the manuscript.

Now, I got hyper organized in this project and used Keywords out the wazoo to tag every scene with the characters that appear in it.  This actually wasn’t going to be good enough for me to hunt down the scenes that needed changes, if only for the simple reason that (until a full read-through) I might miss offhanded references in thought or dialogue to a cut character where they weren’t otherwise present. 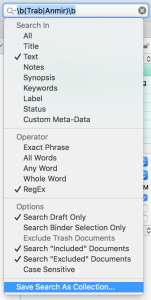 I love Scrivener’s search function.  A text search for the names of the cut characters was obviously what I needed, and Scrivener is about to make my life a lot simpler.

Because these two characters were to be removed simultaneously, I put them in the same search.  You could make separate searches out of these, but I liked the idea of treating this as a single step of revision.

To make it work, I use the RegEx operator type, which enables the arcane “pattern matching” mode.  I put a \b at the start and the end to signify a word boundary (so that “Trab” didn’t match the word “demonstrably”—a case sensitive search could help you here, but not if the name was something like “Koa” and you used the word Koala at the start of a sentence somewhere in the manuscript).

The parentheses are wrapping a list of things I’m looking for, and the pipe character | between the names is an OR operator.  If you need to, you can append more of those into the parenthesized list: \b(Trab|Anmir|Kenjn)\b

So now we can save the search using the last option in the list, and you get a new tabbed item in your binder:

Now you have a list of scenes where these names appear.  Don’t rely on this to catch everything (I know for sure that I have scene where a POV character sees these characters without knowing them well enough to use their names) but it’s a great automatic TODO list of scenes that need attention.

Once the scene has no more mention of either name, it’ll automatically get removed from the list.  If that’s a problem, you can make your own custom Collection via that thin little + icon by the word “Collections” and drag all of the scenes in your search to that Collection instead.

This is basically my task list for the next week or two!  Thanks Scrivener!

Adult fantasy with a taste of science fiction.